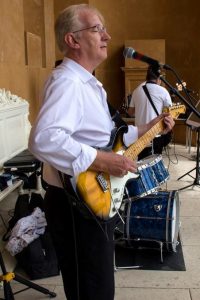 Mike has been playing guitar since he was a teenager and was a founder member and front man of the long running Norfolk based 60’s tribute band “The Yarebeats”. During his time in The Yarebeats Mike and The Yarebeats played support for many of the big name 60’s bands. “Juliet” was one of the tracks on the Yarebeats album “With the Yarebeats” and was a song that won them an accolade from Marty Wilde as being the best live version he’d ever heard. Mike retired from the music scene in 1982 only returning to performing in 2004 when he teamed up with professional singer/songwriter Linda Watkins. Mike and Linda are both multi-instrumentalists and the stage at one of their gigs is so full of different instruments it has often been described as resembling a music shop! Now also a popular singer and songwriter on the Folk circuit in his own right, Mike also plays bass and performs a one man Shadows tribute.

Kevin is the timekeeper of the band keeping the beat moving along like clockwork. If we ever manage to catch this lovable bundle of energy we’ll ask him to tell us how he came to be a drummer 🙂 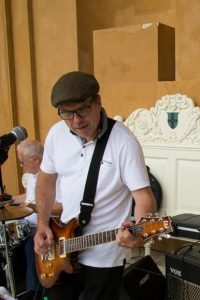 Born in the early sixties Stephen grew up with the soundtrack of classic merseybeat pop, rock and soul tunes.
Taking up trumpet at 11 and guitar at 14 he went on to play with Milton Keynes legend Eddie Stanton during his Polydor days in the 80’s and played sessions on albums by Branded and Craig Hudson.
Stephen formed The Retros in 2009 and they are well established in Bucks, Beds and Northants. After his other project, Minor Prophets folded after 5 years in 2016 he saw a chance to return to the music of his early years and he jumped at the chance to complete the line up of 60’s Jukebox. Stephen also has a weekly radio show “The Retro Music Show” on CRMK 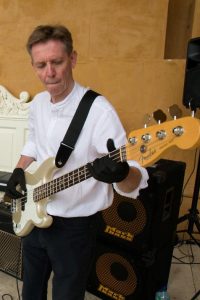 Tim has been playing guitars for over 40 years. He joined his first band – a folk/rock band as lead guitarist aged 17 but left the band in 1981 to attend university. Guitar playing remained a hobby for many years as the “traditional” career focus took over, then he began to pick it up again in recent years, aiming to rejoin a group of like-minded musicians. The 60s Jukebox is exactly that, and playing bass to a sixties music set is great fun. Tim also plays guitar and sings in a local acoustic duo and supports a local choir with occasional guitar accompaniment. Tim owns more than a dozen guitars of various types and ages, including two treasured specimens from the 70s, both owned since he was 17!